This is an example of an aquarium moss ball sold in a pet store containing an invasive zebra mussel. (Photo courtesy of the U.S. Geological Survey) The large pet stores stopped selling the moss balls. The educational focus is now the small retailers and aquarium owners. State and federal officials […]

This is an example of an aquarium moss ball sold in a pet store containing an invasive zebra mussel. (Photo courtesy of the U.S. Geological Survey)

The large pet stores stopped selling the moss balls. The educational focus is now the small retailers and aquarium owners.

State and federal officials are concerned if live zebra mussels are released into a storm drain or flushed into the sewer, they could eventually be introduced into a nearby waterway. Another avenue for zebra mussels in moss balls to spread would be if a pet owner dumped their aquarium into a lake or stream.

Detailed information on proper disposal and disinfecting tanks, pumps and accessories is being widely publicized in aquarium and pet supply stores, garden centers, florist shops and online retailers. See the U.S. Fish & Wildlife Service (FWS) article, entitled “Destroy! Don’t Dump!,” at https://www.fws.gov/fisheries/ans/zebra-mussel-disposal.html to learn much more about the opportunity to prevent the spread of the zebra mussels found in the moss balls.

The moss ball specimens arrive frozen or preserved in alcohol at the lab to avoid any unintentional release and spread, according to the April 2021 MAISRC newsletter. The University of Minnesota Genomics Center and MAISRC will work together to sequence the genetic markers.

Dr. Nicholas Phelps, MAISRC director and research fellow, who is managing the rapid response project, explains, “We are sequencing the genetic markers from the moss ball zebra mussels to determine their origins and to build a database that can be used for future comparisons. That way, if any new lakes become infested with zebra mussels in Minnesota over the next few years, we may be able to genetically link those populations. Was the new lake infested from a neighboring infested lake, or was it from the release of these moss ball zebra mussels? By conducting this genetic testing now, we’ll be able to know.”

A Minnesota Department of Natural Resources roundtable involved in aspects of retail aquarium and aquatic plant trades, including wholesalers, suppliers, retailers, hobbyists and associations, met circa 2019.

This example of the moss balls with zebra mussels found in over 25 states, including Minnesota and also Canada, does demonstrate retail aquarium trade can be a major pathway in the spread of AIS.

If you are a hobbyist with an aquarium or an aquatic plant pond, check out the Habitattitude.net website. There are tools for choosing the right species and protecting the environment. Get ideas for water gardening, aquarium fish, reptiles and amphibians. Check out their news for rehoming options or exotic pet surrender events if you are no longer able to care for an exotic pet.

Please continue to clean, drain and dry boats and trailers before moving from one waterbody to another. Use the complimentary decontamination station in Park Rapids – just call ahead for your appointment at 218-252-6738. Dispose of unwanted live bait properly. Place it in the trash to destroy it. Don’t dump it in the lake.

Our northwest region Minnesota DNR AIS specialist’s email is [email protected], if you have questions on AIS identification and management.

Members of the Hubbard County Coalition of Lake Associations write a monthly column in the Enterprise regarding water-related opportunities in the region.

Max and Cheekette are a dynamic duo with unbreakable bond

Sun May 9 , 2021
Hi Winston and Greetings Everyone: My name is Cheekette, and I am the better half of a couple along with my devoted partner and very best buddy/hubby, Max. I will be speaking on behalf of both of us as I am definitely a take charge kind of gal! We are […] 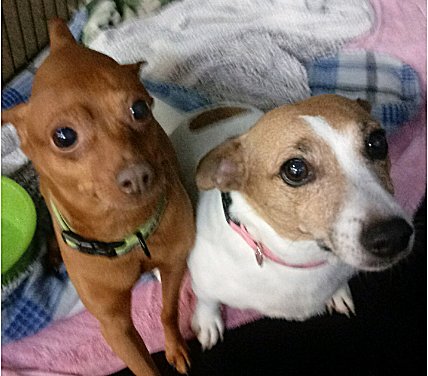