The average dog has put on almost half a stone since the pandemic began with pets in London gaining the most weight, new research suggests.

A survey by charity Guide Dogs found Brits have been feeding their pets more treats and taking them on less walks while working from home.

Nearly a quarter of those surveyed put extra snacking down the fact they are spending more time with their dogs, while one in five said they just can’t resist their puppy eyes.

Other reasons given for extra treats include trying to keep pets quiet during important conference calls and to stop them barking when home deliveries arrive.

The research found pets with male owners have gained more weight than those with female owners.

While a third of those surveyed blamed ‘lockdown lard’ on dipping into the treat tin more often whilst home working, a quarter admitted that they take their dog on fewer walks due to longer working hours and struggling with a lack of routine at home.

Perhaps due to having less access to countryside and green spaces, dogs living in London saw the largest average weight gain at 5kgs – or half a stone.

Dogs that don’t get enough exercise can develop behavioural problems such as licking too much or chewing things.

Dr Helen Whiteside, Head of Research at Guide Dogs, said: ‘Our research has shown that lockdown has had a significant impact on many dogs’ health and wellbeing. And while a little weight gain is not the end of the world, it is important that owners address it as soon as possible, to prevent medical issues like heart disease, diabetes and joint problems later down the line.

‘A healthier dog is a happier dog, so owners should prioritise daily walks, consider healthy treat swaps and check their weight on a regular basis.’

In response to the research, Guide Dogs are urging the nation to sign up to their May ‘Walk your Socks off’ challenge.

Anyone who takes part is encouraged to raise at least £50 to help fund the charity’s efforts to aid children and adults in the UK living with sight loss.

How to help your dog lose weight

For more stories like this, check our news page.

Get your need-to-know
latest news, feel-good stories, analysis and more

Tue Apr 6 , 2021
Want to add a furry friend to your family and make a positive impact on the world at the same time? Then you should consider adopting a pet from a local shelter or organization. Despite the COVID-19 pandemic, many pets are still looking for their forever homes and animal shelters […] 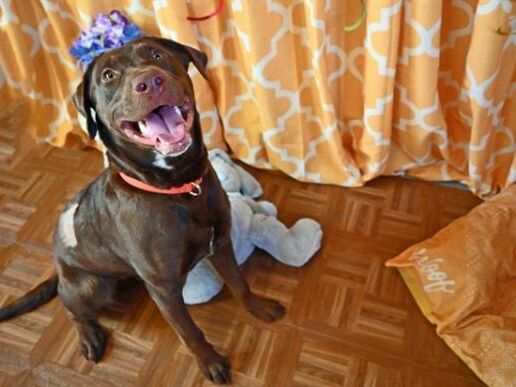