The heartbreaking story of the cat that was left dumped at a shelter by its owners after 18 years has gone viral. Cat lovers on Reddit were left with mixed emotions after a photo of Pumpkin the ginger tabby was posted to the site by u/DoctaEiffel. Writing alongside the adorable […]

The heartbreaking story of the cat that was left dumped at a shelter by its owners after 18 years has gone viral.

Cat lovers on Reddit were left with mixed emotions after a photo of Pumpkin the ginger tabby was posted to the site by u/DoctaEiffel.

Writing alongside the adorable snap, the poster explained that Pumpkin had been abandoned at an unnamed animal sanctuary by her family of nearly two decades because they “didn’t want cat hair anymore.”

Despite the distressing circumstances around the cat’s arrival, Pumpkin had since been adopted and appeared to be in good health, with the picture showing her with one paw outstretched, relaxing on a bed spread.

Regardless of this, the image and accompanying story drew a huge response from fellow cat owners on Reddit, many of whom expressed shock and sadness at the circumstances surrounding her adoption.

DancesWithElectrons wrote: “How the heck could you give up a pet after 18 years?”

Riley_Cooper_SC replied: “I have honestly no clue. How can they give away a companion after 18 years only because of hairs?”

HeadDrill wrote: “I sometimes judge people by how they treat cats.”

GD_Bats went further: “I always judge people by how they treat animals.”

They explained: “Dogs will do anything for you. But a cat requires patience and consent.

“It teaches the human to understand an animal that isn’t always at your beck and call… This is why I judge people by the way they treat cats because it will tell me if this person is patient, considerate, and does not require to be pleased all the time.”

For filthymcbastard, Pumpkin’s story served as an example of the way some people treat pets like objects.

“Things that if they inconvenience you, you get rid of. Dog limping? Put it down. Grand-dad’s old, all original Mustang needs tires? Hardly worth it. To the wrecking yard with it… The nerve of some people.”

Techleopard, meanwhile, said: “I am willing to bet this was someone’s childhood pet and they moved out to school.Going to come home to visit and hear their kitty ‘ran away.'”

Ennino16 agreed: “Growing up, my parents used this excuse so many times when they gave my puppies/kittens away.”

Varyskit, meanwhile, suggested the decision may have been a financial one.

“They figured the cat has gotten old and will start developing even more medical issues which costs money so may as well throw it away,” they wrote.

“Doesn’t matter it is (or if it ever was) part of the family. Quite unfortunate.”

CreaTrish, however, felt this was no excuse for such treatment. “You don’t throw away people or animals that you really love,” they wrote.

“You find a way to help them. He doesn’t look like he’s ill he’s gorgeous!”

Others like OneMorePenguin called on his fellow Redditors to reserve their judgement as they did not know the full story.

“This might have been a family that had to choose the family pet or paying the rent. We don’t know,” they wrote.

“At least they didn’t dump him on the street. Not all shelters will take older cats that don’t get adopted quickly, when there are still lots of kittens looking for homes.”

Some spoke of their experiences working in animal shelters and revealed that cats this age were regularly brought in.

Reinadeluniverso said they “saw a lot of cases like that.”

“Once an old woman passed away, and they left her 4 cats unattended for nearly a week, and then they wanted to get rid of them,” they wrote.

“They were all older kitties, 10+ so it was really difficult to find someone to adopt them.”

James120756 agreed: “I was a volunteer at our local shelter for years. I worked with the seniors and I saw this on a frequent basis. It broke my heart.”

Despite the circumstances surrounding her arrival at an animal shelter, Pumpkin is one of the lucky ones.

According to figures compiled by the American Society for the Prevention of Cruelty to Animals approximately 3.2 million cats enter U.S. animal shelters nationwide every year.

It is estimated that around 1.6 million end up being adopted every year.

Thu Jul 22 , 2021
Spate of mystery dog deaths is linked to a native plant as owners are warned to stop feeding their pets a certain type of product Dog deaths in Victoria have been linked to pet food from a local knackery Investigations found deaths are due to a plant toxin eaten by […] 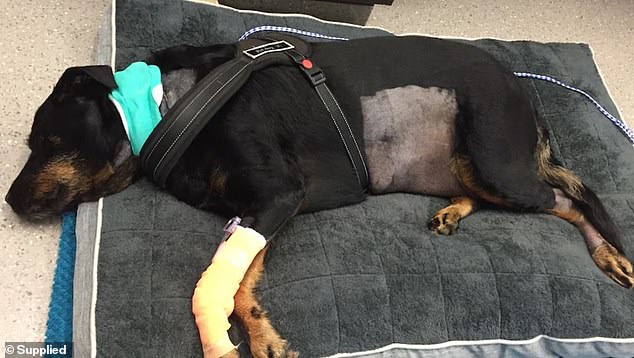