Call it a tale of wags to riches. The presidential inauguration Wednesday heralds a new era: the first time a shelter dog will live in the White House. President-elect Joe Biden and his wife, Jill Biden, adopted their pup Major, a German shepherd, from the Delaware Humane Assn. just over […]

Call it a tale of wags to riches.

The presidential inauguration Wednesday heralds a new era: the first time a shelter dog will live in the White House. President-elect Joe Biden and his wife, Jill Biden, adopted their pup Major, a German shepherd, from the Delaware Humane Assn. just over two years ago.

“It doesn’t get more of a Cinderella story for a dog,” said Kitty Block, president of the Humane Society of the United States. “And the timing couldn’t have been better.”

Block said that Major’s move into the West Wing represents a shift among Americans away from buying pets and toward adopting them instead, a trend that has only been furthered by the pandemic. She hopes having a shelter dog in the first family will cement the end of pet-buying in the U.S.

In 2008, the Bidens purchased their other German shepherd, Champ, from a breeder, after Joe promised Jill that they would get a dog if they won the election. (President Obama made a similar vow to his children and came home the following year with Bo the Portuguese water dog.)

The sale of Champ sparked backlash from animal-protection advocates, so when the couple wanted another pet in 2018, they decided to adopt. That shift tracks with larger trends.

In 2008, 41% of dogs in the U.S. were purchased through breeders or at pet stores, while about a quarter were adopted, such as via animal shelters or rescues, according to survey data from the American Pet Products Assn. By 2018, the latest year for which data is available, 28% of dogs were purchased and 36% adopted.

And in 2020, as a novel virus isolated people inside their homes, adoptions grew even more common. There isn’t yet national data on how many pets have been adopted during the pandemic, but there were dozens of reports last spring of shelters completely emptying of pets, many for the first time.

The Riverside County Animal Shelter in Jurupa Valley posted a video on Instagram in early April of staff cheering as they stood in front of the empty pens after the shelter was cleared of all its animals. The demand for dogs was so high, “we couldn’t keep them in the shelter,” spokesman John Welsh said.

The pace of adoptions has slowed since the spring, though it continues to be higher than normal, Welsh said. The pets going home with new families during these unusual times are especially lucky, he said.

“The people who adopted have been with their pets pretty much every day because of the lockdowns, and people were not at work, so these are really amazing bonds that will happen between the pet owners and the pets,” Welsh said.

Humans too found much to love in their pets during the pandemic: companionship, solace, comfort, joy and more. And for many who felt helpless while witnessing so much devastation and grief, bringing home and caring for a rescued pet gave them purpose.

“That sense of saving a life has really helped increase adoptions and rescues across the country,” Block said.

In 2019, 5.4 million animals entered shelters nationwide, but 625,000 were killed, according to the nonprofit Best Friends Animal Society. More than 100,000 of the cats and dogs killed were in California, according to the organization’s statistics.

California has pursued several efforts to reduce deaths of unwanted animals. In 2017, the state became the first to pass a law banning pet stores from selling commercially bred dogs, such as those from puppy mills.

As of Jan. 1 of this year, the retail sale of dogs and cats is no longer allowed in the state. Shelter or rescue groups can offer pets for adoption in pet stores, as long as the store isn’t paid to display the animals.

At Best Friends Lifesaving Center in Mission Hills, more pets were adopted in December than ever before in that month — 407 last month compared with 275 in December 2019, spokeswoman Michelle Sathe said. The number of animals being placed in homes has been at record highs since last spring, despite the shelter being closed to the public due to COVID-19, she said.

“It’s been wonderful,” Sathe said. “It’s really one of the few silver linings to COVID — that it has been helpful to shelter pets to find homes.”

Although puppies and kittens have always been popular, animals with behavioral or medical issues, which would often have to spend a long time waiting for the right family, are now more likely to be adopted, Sathe said.

“People are way more willing to open their hearts and their homes to these dogs and cats,” she said. “It’s because they have time on their hands, and because of that they’re willing to really spend quality time with those pets.”

Sathe said the pandemic has fundamentally changed shelters so that they act more as a thoroughfare and less as a holding place, with animals spending less time in shelters and moving more quickly into homes. “No one is going to argue that the shelter is the best place for a pet to be.”

On Sunday, the Delaware Humane Assn. hosted a virtual “Indoguration” to celebrate the first shelter dog in the White House.

The association took in Major in 2018 as part of a litter of six puppies that had been exposed to toxic chemicals in their home and their owner could not afford treatment for them. The Bidens fostered Major and eventually made him a permanent addition to the family.

Though Major is the first shelter pet to live in the White House, he is not the first rescue. In 1966, President Lyndon B. Johnson’s daughter Luci found a dog at a gas station in Texas that eventually became the president’s companion. The Clintons had a stray cat. Shelter pets are typically rescued and then spend time at a shelter waiting to be adopted.

“What does DHA-adoptee Major going to the White House mean to us? Well, it means everything,” Patrick Carroll, the organization’s executive director, said at the virtual event. “It shows that shelters are a wonderful place to adopt.”

After four years with no animal occupants, the White House will soon get a dose of chaos and cuddles with Major and Champ. But that might not be the end of it.

The Bidens have recently said they want to add a cat to the family. Maybe they’ll adopt.

When Evictions Loom, Pets Are Also at Risk

Tue Jan 19 , 2021
The Deshommes’ story has a happy ending: Nova and Luna Bear went to a foster home organized by the Animal Protective Association of Missouri, and the family eventually found an affordable apartment and moved in, felines in tow. But many pet-owning renters uprooted by the pandemic have had a tougher […] 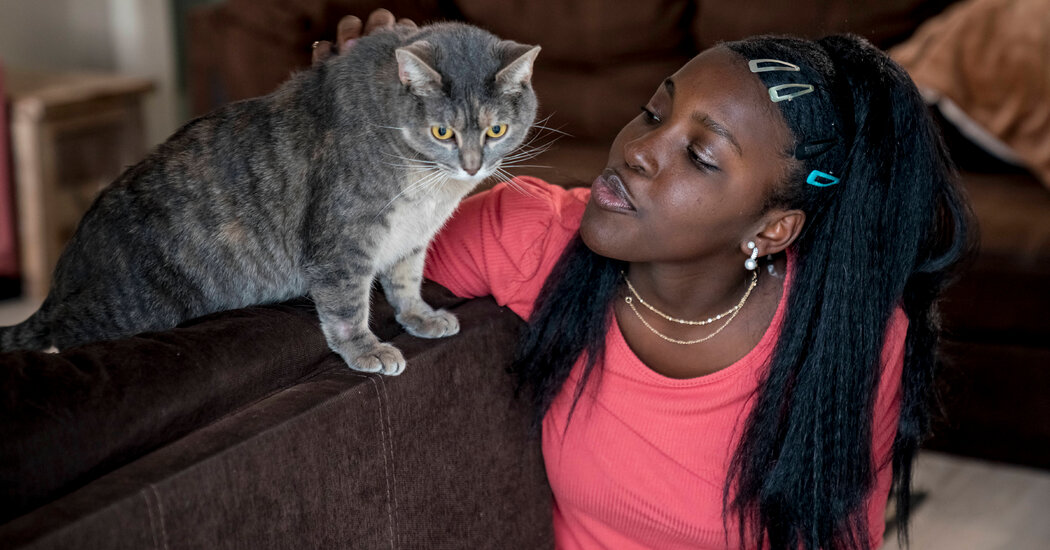